Plant This, Not That: 10 Native Trees to Plant in Place of Callery Pear

“My heart is broken.” A woman dipped her head back and sighed as cars zoomed behind her and freshly cut tree trunks lay bucked up in scattered rows. A long row of Bradford pear trees, a cultivar of Callery pear (Pyrus calleryanna), had bloomed in her Kansas community for years, and now they were gone. “This is the best part of our neighborhood,” she told a news reporter.

It’s easy to see what she loved about Callery pear trees: billions of white flowers put on shows in early spring and waxy red leaves blaze in the fall. As a plus, they grow fast to fill in new developments.

Of course, a closer look reveals many reasons for a neighborhood to cut down all their Callery pears.

For one, Callery pear blossoms smell terrible. Their showiness is loved by some, but after the blooms are gone, the tree isn’t that interesting (native trees, such as native oaks, provide ecological benefits for hundreds of caterpillars and other wildlife). Even HGTV recommends finding an alternative to Bradford (Callery) pear trees, due in part to the way their branches break easily in wind or ice storms. And of course, there’s the way the cultivars’ cross-breeding causes big problems as an invasive plant.

While we at the Missouri Invasive Plant Task Force support stopping the sale of invasive plants such as Callery pear, we know many people may ask, “If I cut down my Bradford pear tree, what should I replace it with,” or, “What should I plant instead of a Bradford or Callery Pear?”

Fortunately, many alternatives are available from Grow Native! retailers and wholesalers.

The following are 10 native Missouri trees we recommend planting in place of Callery pear. These species not only challenge Callery pear in springtime beauty and/or fall color, but they also support the local ecosystem by providing food to wildlife that have coevolved with the trees over millennia. You can’t get much better than that.

This list was inspired by the City of Columbia’s “Stop the Spread” campaign to manage the threat of invasive Callery pear tree hybrids.

Learn more about these and other Missouri native plants on the Grow Native! Native Plant Database. See our events page for upcoming buy-backs in Missouri.

Download our poster set of Native Missouri Trees to Plant Instead of Callery Pear.

Viburnum prunifolium (black haw viburnum) have flat heads of white flowers in the spring. Birds eat the purple-black fruit in the fall. The edible fruit tastes like raisins. Grow as a small tree or multi-stemmed shrub. The leaves develop a beautiful red color in fall.

Prunus americana, Wild Plum, can be grown as a single trunk tree or multi-stemmed shrub. The pure white, fragrant flowers are among the first to open in spring. Heavier flowering in sun. Yellow to red, round, edible fruits, 1″ in diameter. Host to Red-spotted Purple Butterfly and many moths.

Ostrya virginiana (ironwood or Eastern hop hornbeam), is a tough understory tree with beautiful birch-like leaves, grayish-brown flaky bark, fine-textured drooping branches, and attractive hop-like fruits. Ironwood is considered one of Illinois’ toughest native hardwoods and is not only ornamental but resistant to many disease and insect problems. 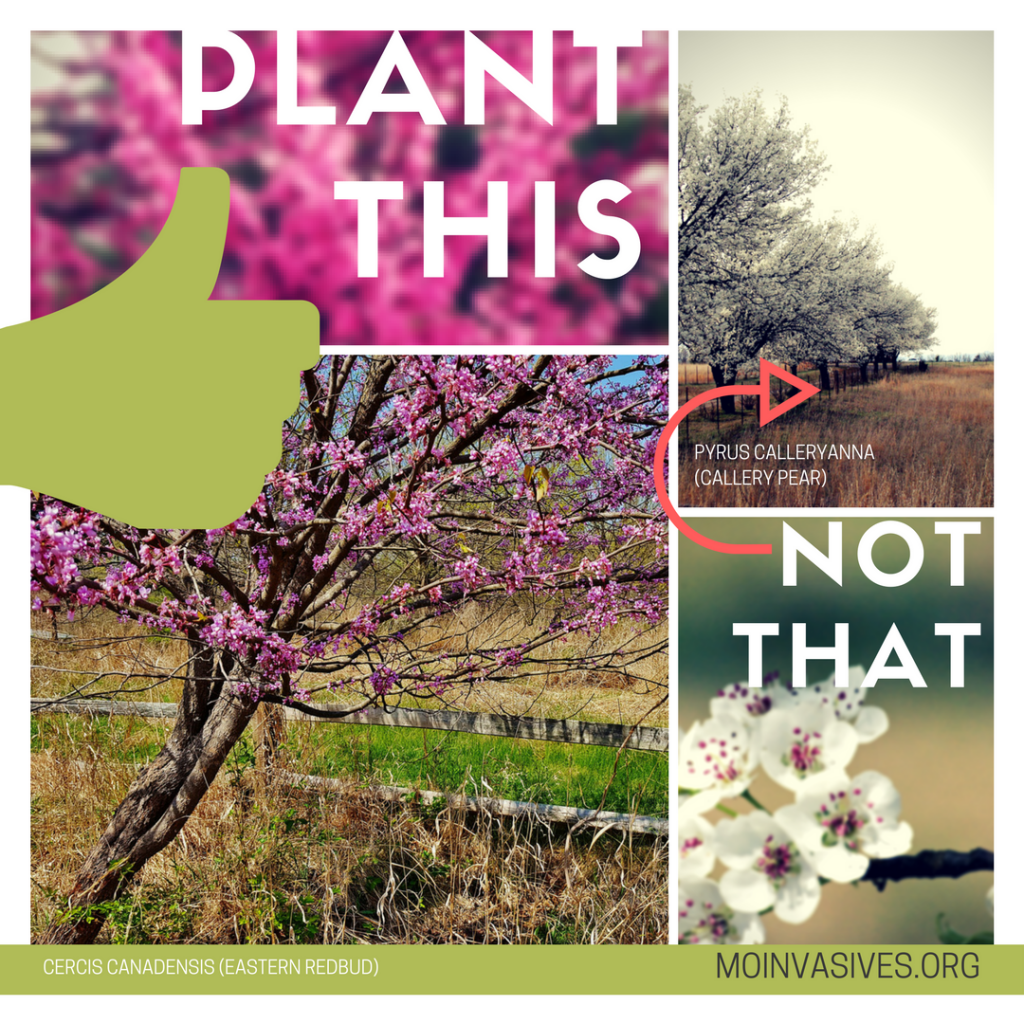 Amelanchier arborea (serviceberry) is a tall shrub or small tree bearing clusters of fragrant white flowers in April. Flowers give rise to very flavorful, red to purple-black, berrylike fruits relished by both songbirds and people. This lovely tree has colorful fall foliage in a blend of orange, gold, red and green.

Nyssa sylvatica (black gum) is one of our most beautiful and underused native trees. Makes an excellent specimen tree, tidy shape. Attractive, glossy, dark green leaves that turn yellow, orange, and scarlet red in fall. Bark is dark gray to almost black, alligator-like patterns when old. Fruit the size of navy beans ripen to a dark blue in fall and are a favorite food to many birds. Host for the black and white Hebrew Moth. Learn more and find nurseries, landscape services and more at Grow Native! 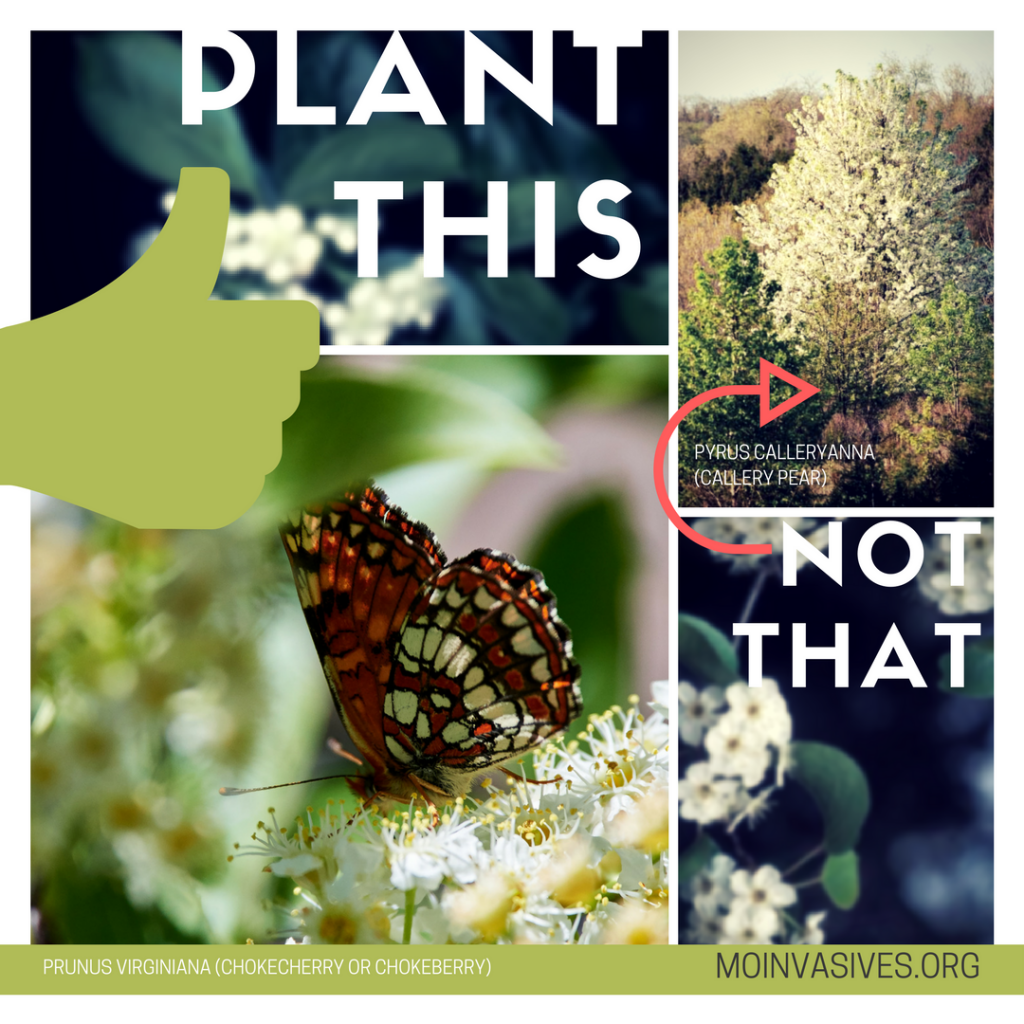 Prunus virginiana (chokeberry or chokecherry) is a small, suckering tree or large shrub with attractive white flowers on 3-6″ long clusters in spring. Fruit is red, ripening to purple in fall. Grow as a screen or as an understory planting as it has unusual shade tolerance for a cherry.

"Callery pear seedlings are moving further and further into the countryside, away from the suburbs and cities from whence the problem sprang," writes Brett O'Brien, Natural Resources Supervisor for Columbia, Missouri Department of Parks & Recreation. Here is why...

Planning to remove invasive Callery pears from your property? Here’s what you need to know

Our Callery Pear Buy-back events, both scheduled for April in St. Louis and Columbia, have been postponed indefinitely. However, we still encourage property owners to cut the trees during spring (when they are easy to identify) as a means to reducing populations from...

Do your part to reduce this highly invasive tree that threatens native wildlife and causes difficulties for private and public landowners, and receive a free native tree! Jefferson City, MO (April 15, 2019)—Homeowners with an invasive tree in their yard can celebrate...